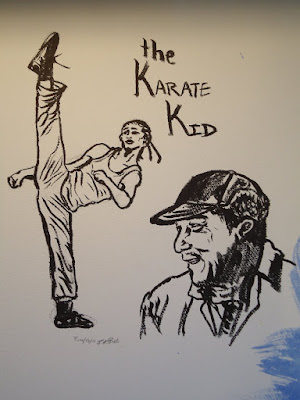 Here is a rough warm-up I did the other day before gettin' down to business. I had just recently seen the new Karate Kid movie (it was purty dang good) and thought I would try my hand at Jaden and Jackie.
Thanks for looking.
God bless ya and have a good one!
Posted by Philip A. Buck at 11:17:00 AM No comments: 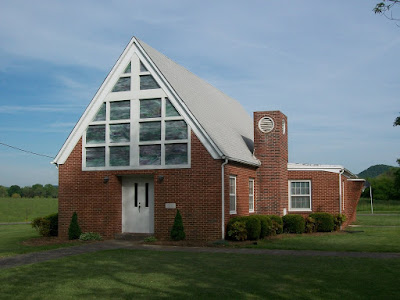 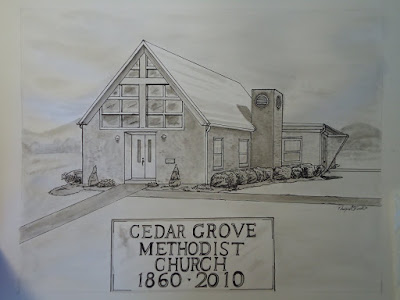 ...couldn't get a great photo of this one (surprise!), but thanks for checkin' it out and swinging by!
God Bless ya and good day!
Posted by Philip A. Buck at 4:49:00 PM No comments:

Below is the second and last part of a exhibit proposal I wrote up a little while back. It was all hypothetical and was never intended to actually be put on display. I did this for the purpose of research. I had interest in Roy Lichtenstein's work, not only because my work is heavily comic book influenced, but also because I appropriate quite a bit in my own work and I was curious to explore the issues that come with that process. What you read below is what would be in the brochure for the "exhibit," and examples of what has been discussed. Enjoy: 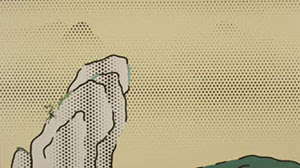 If he appropriated or stole his images and ideas is still a matter which many who see his paintings have strong differing opinions about. We hope that while you visit this exhibition you will consider these questions and ideas while you gain a clearer understanding of what artistic appropriation is and perhaps gain an opinion of your own about whether Roy Lichtenstein was a thief or not. 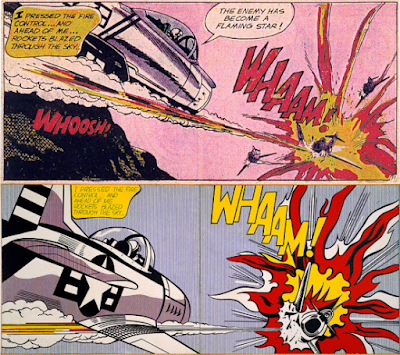 In the image that appears on these two painted canvases is a dynamic quality of action and excitement. Here, Lichtenstein draws inspiration from wartime and action comics. He uses the comic art style as a way of making the subject matter of a plane shooting down another less serious. Even though he chose the subject of war in order to make small commentary, his main purpose was to also exhibit the style’s simplified structure and reduction of forms.

Removing parts of the background and other planes from the source image, Lichtenstein sharpens the focus of the composition to be on the action and broad areas of color. He even moved the caption to better fit his artistic intention for the composition and completely removed the speech balloon of the pilot in the left fighter plane. Even with all of these changes, when one sees the comic book panel and then compares it to the painting by Lichtenstein the obvious similarities between the two images cannot be ignored. 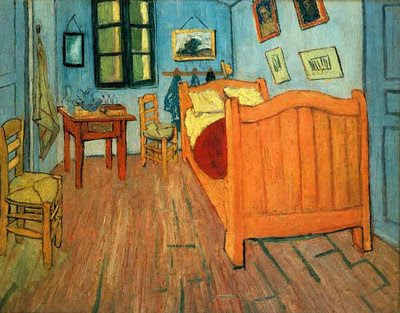 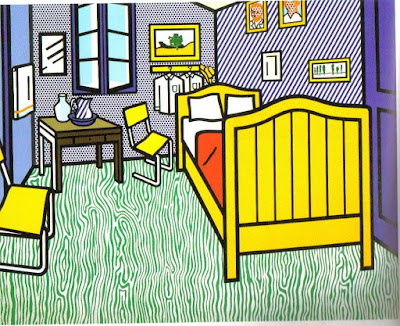 In this rather large painting, Lichtenstein attempts the subject of Vincent Van Gogh’s painting, Bedroom. In Lichtenstein’s version of the room, most of the objects, including the bed and chairs, are all in about the same position. The room still has a window, blue walls, and a yellow bed with a red blanket. Lichtenstein does however recreate the scene in his comic influenced style. The green floor in his image still looks like it is meant to be made of wood; however his floor is a pattern of wood grain, not actually boards of wood. The floor is also not in perspective as is the room, but instead an apparently flat design. His furniture and objects in the room are modern counterparts of those found in the Van Gogh painting. Where Van Gogh’s version is painterly with visible brushstrokes, Lichtenstein’s version is crisp without visible marks of the brush. His industrial approach in some ways lends his version a less lifelike quality.

Still, it could be said that just as Van Gogh painted the scene as seen through his impressionistic lens, Lichtenstein, in the same manner, has painted the scene through the lens of industry and popular culture.

Thanks so much for stopping and reading. I hope it was of your interest. (Please ask for permission before reproducing.) I will put more of my own work up soon, but until then...
...God Bless and have a good one!

Part One can be read HERE.  (Please ask for permission before reproducing.)

EDIT: It's been quite sometime since I wrote this hypothetical exhibit proposal. Since then my own personal view about Lichtenstein's early "comic art" and all of his work in general has changed often in various ways. This piece I've written, however is still meant only to clarify some things about his work and move the reader to ask themselves what they think.
Posted by Philip A. Buck at 8:09:00 AM 5 comments: