Here are some more recent sketches (a few of many) from the old sketchbook and scrap paper.﻿ Click to see them bigger.
﻿ 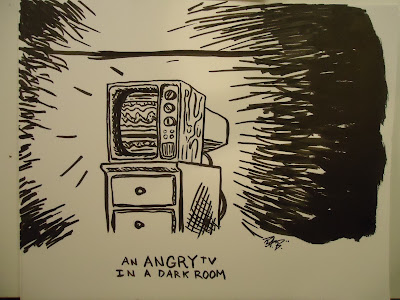 Have you ever visited Project: Rooftop? It is a great site where artists and comic book fans alike can take a stab at redesigning superhero costumes.  They just recently had a fun contest in which participants attempted to redesign Spider-man's suite. Since the contest is now over and the honorable mentions, 1st, 2nd, and 3rd prize winners have been already announced (no I didn't get it this time,) I figured I would share my design with you wonderful people. You may click the images to enlarge. I hope you all dig it :)

Here is the description that I sent with the submission:
"When I first started brainstorming designs, I went really "out there" and had to reel it in a bit to keep him recognizable.
I wanted to design something that a teen hero could actually make for himself and then tweak and improve over the years. I decided that a big part of what is iconic about Spidey's look is the eyes, the colors, and the webbing. You know, all the good classic bits. So, I just kept all of that. Why throw out what works so well?  I made the red web area on his chest cover the rest of his front torso and not run down the side of his arms. The sleeves end with some web down by the hands. I thought I would go for a simpler shirt-type garment made of "under armor"/athletic material.
His gloves are based off of actual army gloves and would have the web-shooter built into them.  The little sensor pad in the palm is connected to the external shooter in the strap.  This way, there is no worrying about getting his web to go through Spidey's cloth gloves as with the old suit. The fingers of the glove are cut to reveal a thinner blue material that allows his "sticky fingers" to do their thing better. His mask is straight up Lucha style, laces and all.  The traditional spider on his back is now a pouch/case that can blend into the costume or carry things like extra web cartridges or his cell phone so he can call anyone and tell them he "is running late because something came up." I figured that a "built in" storage would be better than Spider swinging around with Peter Parker's back pack all of the time.  I gave him a belt because, well, gotta keep those pants up."


I draw ol' Bats quite a bit, but because I'm a pretty tough self-critic when it comes to the vigilante, I haven't really posted many of those drawings on here.  That changes now! I drew this yesterday as a long warm-up sketch. It's ink on bristol, about 8x11.5? Hope you kids dig it, God bless!
Posted by Philip A. Buck at 4:59:00 PM No comments: