Jonny and the BPRD? Fictional Covers for Fiction.


Oh man! I finished this a good little while back (a few months?) and having other stuff to post first, completely forgot to post this. I decided to do a little some more comic book covers to practice and if any were awesome I could use them for my portfolio or something. They wouldn't be for an actual comic, just for fun/practice. I thought about how cool it would be if the gang from Jonny Quest teamed up with Mignola's Hellboy and the B.P.R.D. Very cool. So I made a comic cover for a miniseries mash-up that would be called something like, "The Fall of Zin." Zin was the only reoccurring Quest villain as far as I know and he fits nicely into Hellboy's world too. 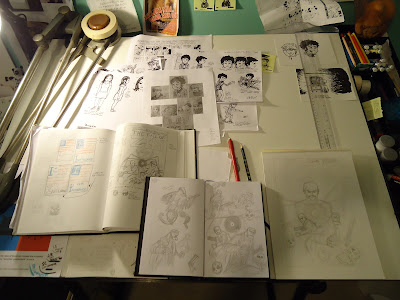 I did a bunch of sketches, as you can see. I was trying to figure out a good composition that would showcase the awesome qualities and moods of both Jonny Quest and Hellboy. 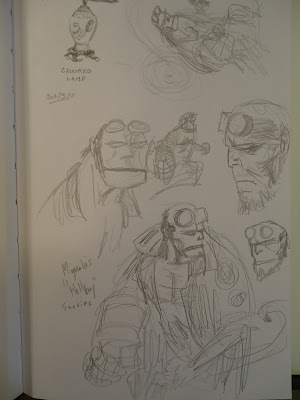 I looked up lots of covers and art by Mike Mignola and the other Hellboy and B.P.R.D. artists for reference and inspiration. I ate up Doug Wildey's amazing concept and character art of Race Bannon (of Quest fame,) for inspiration as well. 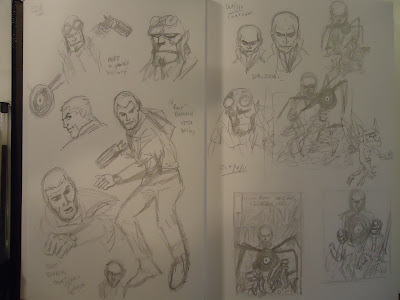 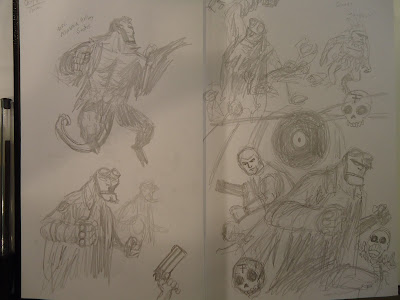 I finally pinned down which composition to use (a pretty straight forward 'classic hero pose' cover.) Then, drew the bad boy out on bristol board paper and went to inking it with my Faber-Castell PITT artist pens. I may have used my Pentel Color brush for the areas with lots of black. 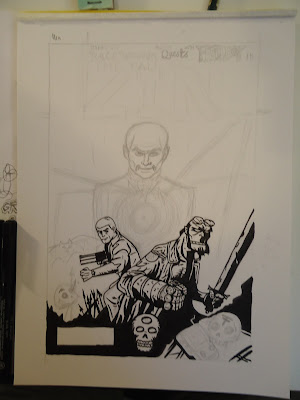 I then scanned it up and adjusted in the ol' Photoshop. The 'before adjustments version' or 'raw' version is this one: 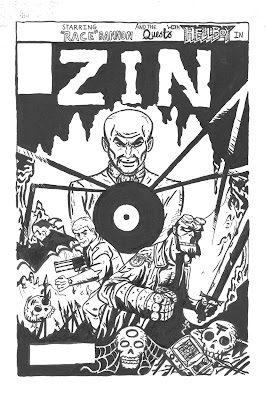 I decided I would use a different method of digital coloring this time around. I usually use the 'Chiarello Method' for work I'm spending this much time and effort on, but decided to use the 'Dharbin' way instead. I seems to be a mixture of the way I quickly color things for online use and the 'Chiarello Method' of coloring for print. I found it to be another good way to color work and I'm still deliberating on whether or not I'll use some version of it as my 'standard method.' 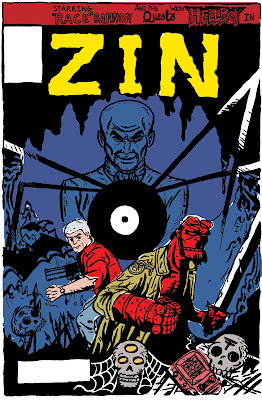 Part of the 'Dharbin Way' of coloring is using a "color plan" to lay out what colors you want and where. It is often helpful to think of color shapes and palettes during this stage. After doing my color plan, I was glad I had because I realized I didn't quite like my choices. I decided to give it another go. 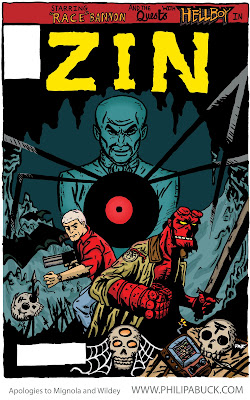 Here it is! Finished! The jury is still out on the colors- I'm always learning and I think the more I learn about color, the more I need to learn! I'm pretty happy with it for now though. :) Which colors do you like best?  Anyways, I think it turned out better than my first go at a Jonny Quest cover I did a few months before: 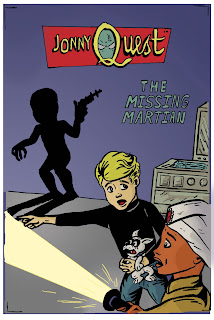 Well, that's all for today. Thanks for stopping by! Remember that the article about my "Alternative Alphabet" illustrations is in this month's Amplifier. If you are in the Knoxville, TN area be sure to grab a copy before they are gone.
Also, don't forget that more of my work, daily musings, and things I dig can be found on my Tumblr and Twitter.
Until next post, God bless!
Posted by Philip A. Buck at 5:17:00 PM No comments: 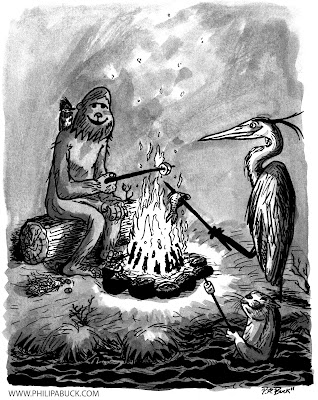 Hey pals and strangers! Here are some more commissioned pieces I completed and the end of this past year. The person who commissioned this drawing really loves nature and river wildlife. As you can see, I had fun doing this one and let old Big Foot (Sasquatch) join in! (Click the images to see them larger) Here is that piece again in photo form. You can see the warmth of the tones a bit nicer. 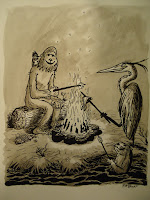 This one was for my friend Leslie who is my "contact" person at The Amplifier. It was a pleasure to draw her pup (he likes T.V.) as a surprise for her hubby. He likes Snoopy, but then who doesn't?!
Whoah, I just realized I'm drinking out of a Snoopy mug right now! Haha weird. Well, thanks for checking in and I hope you guys are having a great MLKJr. Day! God Bless!
P.S. I forgot to mention that this month's issue of The Amplifier is out in the Knoxville area! Instead of my regular contribution of an illustration, this issue has a page about me. Yeah, I know! Its got a little nice article and little versions of all my Amp illustrations so far. Very cool. Those folks treat me well, don't they? So be sure to check the issue out- not just to see me and my article, but also to bring aid to the homeless of Knoxville! Thanks!
Posted by Philip A. Buck at 4:05:00 PM No comments:

Hey gang! HAPPY NEW YEAR! I hope you all had an incredible holiday experience. I enjoyed mine for sure. Part of that enjoyment was getting to work on a bunch of your commissions in the days preceding the holidays. So much fun! 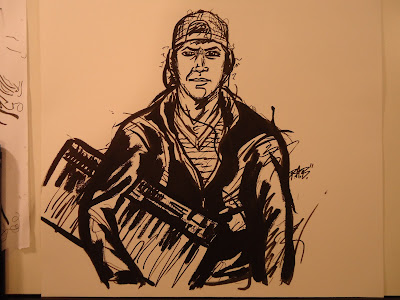 This a work my rad friend commissioned as a gift for her talented brother ("J Tramel Beats.") I did a lot of preliminary sketches and such for it as you can see. I also did many sketches and designs you can't see here. After all that, I finally got the image down just right! 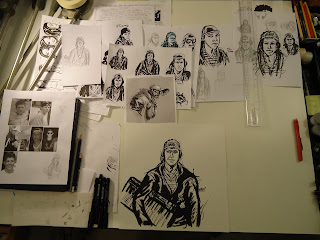 Another cool pal commissioned a piece for her bro, who I'm sure is also talented at doing things. He likes Little Nemo in Slumberland (she purchased one of my Nemo watercolors for him in the past) and the films of Miyazaki, so I mashed them up into this:
I was pretty pleased with the results. Well Troops, I've got to go ant watch some "Murder She Wrote" reruns, so I'll post some of my other recent works another time. Thanks for looking and God bless!
Posted by Philip A. Buck at 1:05:00 PM No comments: