Here is a sketch I did last week in my little sketchbook. It's of a bust of Victor Hugo that was sculpted by the great Auguste Rodin. I roughly drew it in pencil and then inked over it with Faber-Castell PITT artist pens. That's all for this week. Have a great one everybody! God Bless!
Posted by Philip A. Buck at 6:31:00 PM No comments:


October 18-20 was the Wizard World Nashville Comic Con and boy, was it a blast! I'd never been to a comic book convention before so when I heard there was just going to be one so close by, I knew I needed to check it out.


I sure am glad that I did! So many great people were there including comic book retailers, cosplayers, celebrities, and comic and animation creators. The two things I enjoyed the most were the Artist Alley and all of the panels. I tried to go to as many panels as I could, but there were too many great ones for me to be able to make it to them all. On Friday, I had the pleasure of my dad going with me to the convention. We were very impressed by the new Music City Center. We enjoyed going to the "Breaking Into and Staying in Comics" panel featuring Alé Garza, Freddie Williams II, and Danny Fingeroth which was moderated by Dr. Rebecca Housel.


On Saturday there were a lot of panels! The day started with the very interesting panel, "Country Music And Comics" moderated by Danny Fingeroth and featuring Guy Gilchrist, Alé Garza, Shane Berryhill, and Keven Gardner. It was cool to see how much comics and music influence and cross with each other in so many different ways.

I then went to the very informative and entertaining panel, "Classic Animation" Tom Bancroft, John Pomeroy, and Doug TenNapel (who also moderated.) It was a great look back at their careers thus far and gave good insight into their creative processes while sharing advice for animators and storytellers. Such talented and friendly guys!


I then caught the end of Fingeroth's "How to Write Comics" panel. It seemed very good and I wish I had been able to catch the whole thing, but I'm only one man, you know. After that I went to "The Art of Cartoon Animation and Production with Animator/Director Tom Cook," The kind Mr. Cook offered a great look at his career and Filmation Studios, the changes in the way American television animation, and the complete animation process they used on shows like Scooby Doo, He-man and Thundarr.


After lunch, I stopped by for part of the "Voice Acting with Jason Marsden" panel. The use of audience participation (audience members on stage receiving voice direction from Marsden) made it really fun and educational at the same time.


I then went to the "75th Anniversary of Superman" panel moderated by Danny Fingeroth. It featured Superman himself, Dean Cain, Neal Adams, and Travis Langley (shown above) who were all a lot of fun. Mr. Fingeroth did a great job showcasing Jerry Siegel and Joe Shuster and the first comic book appearance of the Man of Steel. The crowd went crazy for it and so did I.
Following that, I sat in on part of the "Clay Model Sculpture and Mold-Making" panel which was pretty interesting too.


The first panel I went to Sunday was the "Drawn to Disney" panel with Tom Bancroft in which he led a "draw along." He showed us all how to used basic shapes to form Disney characters while sharing about his design process of Mushu from Mulan. It was wonderful!
Immediately after that was the "Storytelling with Michael Golden" panel and lets just say I took lots of notes. Mr. Golden isn't only a talented artist, he also knows the ins and outs of commercial storytelling and writing. I think I learned quite a bit.


I also had the pleasure of attending "Supervillains and Psychology" with Dr. Travis Langley Featuring Eric Bailey, Jason Marsden, and Danny Fingeroth. Everyone seemed to have a great time talking about supervillains in comics including what makes them tick and why we like them so much. It was quite entertaining and insightful, you guys. 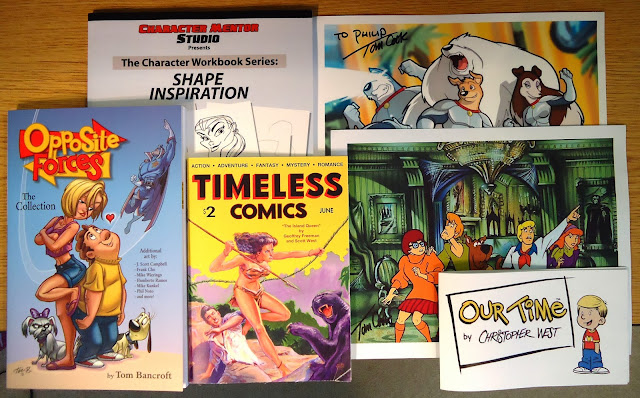 While I wasn't at panels, I was usually in Artist Alley chatting with creators and looking at all of there great work. Tom Bancroft was nice enough to sign my copies of his wonderful character design books and even did a quick sketch in one! While at his table I bought his new graphic novel Opposite Forces and his Character Mentor workbook, Shape Inspiration. Such great stuff!
I also bought a signed print from Tom Cook who gave me the Road Rovers signed print for free! He was really great to talk to. I also had the pleasure of meeting Christopher West and his family. I was lucky enough to buy his comic strip book Our Time (quite funny) and Timeless Comics: The Island Queen (his collaboration with his brother, Scott West and writer Geoffrey Freeman,) which is fantastic!
So many talented people and they were all so nice! It's no wonder I had such a great weekend at the convention. I can hardly wait until next year. Maybe you'll be there too next time! Well, I'm going to go "recover" from the fun and maybe read some comics. God bless!
Posted by Philip A. Buck at 7:30:00 PM 3 comments: