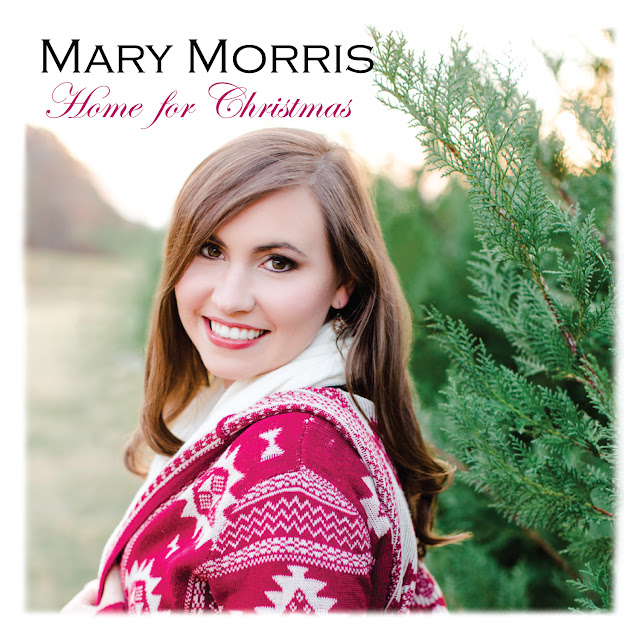 Remember last year when I shared graphic design work I did for my sister, Mary Morris's Christmas album? Now you can listen to Mary's Christmas album on Apple Music, Spotify & Youtube! You can also Download "Mary Morris, Home For Christmas" through iTunes & Amazon! Visit marymorrischristmas.com or click the links below! God bless you all!

Here are the links: 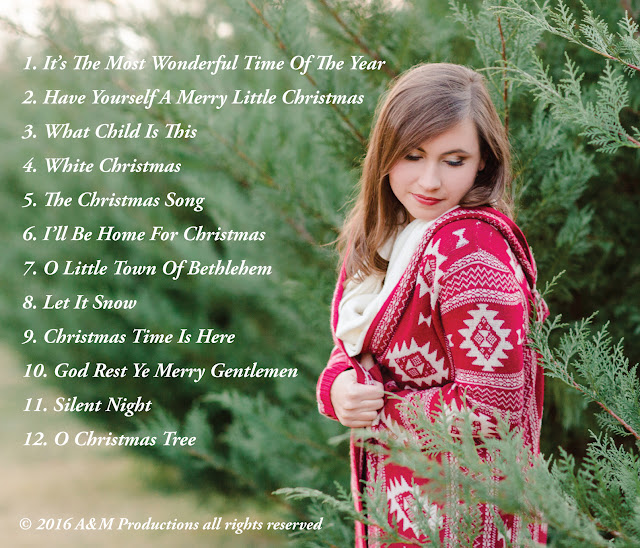 Hello again! I recently completed this commission of a dragon. It's based off of a cover illustration by Michael Whelan from the Dragon Riders Of Pern series byAnne McCaffrey. I've never read it any of the series, but all this dragon drawing kind of made me want to. The person who commissioned this drawing wanted to get her mom a "Pern" dragon picture because it's her mom's favorite book series. Isn't that cool? Lets take a quick look through my process. 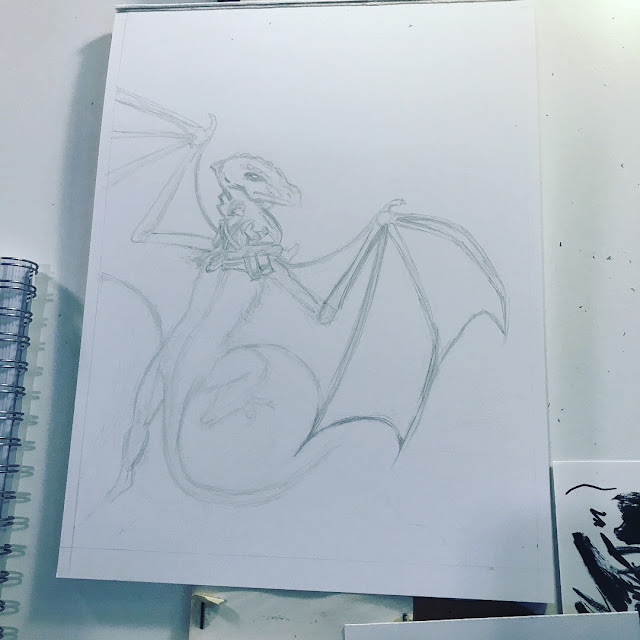 First, I roughed in pencils of the main dragon figure & its rider while paying close attention to Whelan's original while making subtle changes. One obvious change I made is the composition. I also moved some things around, (including some dragons,) & added lots of clouds. You can see the original cover art, "Wheyrworld" by Michael Whelan on his website HERE. 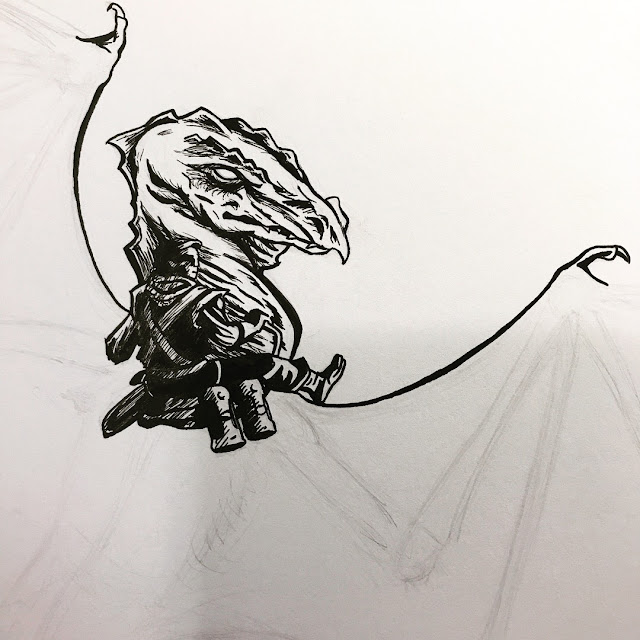 Next came the inks! Below you can watch a quick Instagram video about this step... OK it's just me pantomiming to Enya while inking.

Listening to the #LordOfTheRings soundtrack by #HowardShore while doing some more work on this commission of a #dragon from the #dragonridersofpern series. I may be getting into it too much. (Drawing by Philip A. Buck after #MichaelWhelan with a little #WilliamStout & #williamBlake thrown in. I'm not #Enya.) . . . #fantasy #art #fantasyart #ink #blackandwhite #inktober? #comiccon #commissions #PhilipABuck
A post shared by Philip A. Buck (@philipabuck) on Sep 21, 2017 at 3:49pm PDT 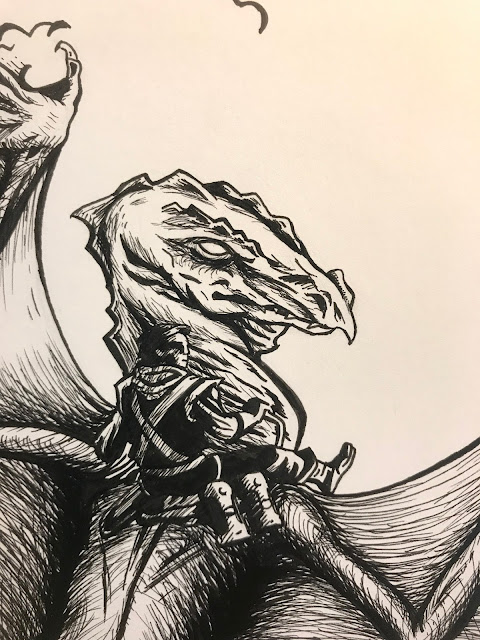 While adding the hatching on this piece, I thought about the way etchings by folks like William Blake & Albrecht Durer look. I approached it more loosely than that, but those kind of pieces heavily influenced my choices. 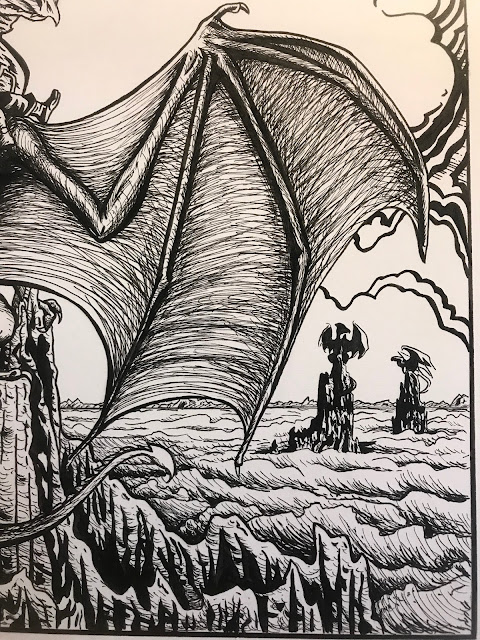 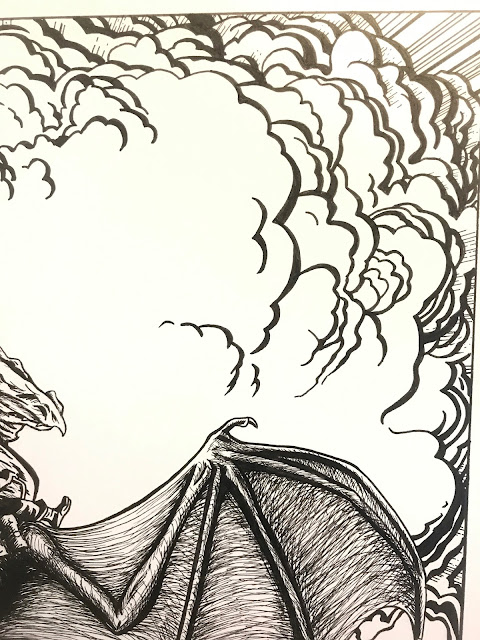 I looked at a bunch of William Stout's work while drawing & inking the clouds. He's a very skilled artist & the clouds in the backgrounds of some of his drawings (namely this King Kong illustration,) are amazing & were used for reference.


And here's the final image again. This one's the "raw" scan before I adjusted the levels in Photoshop. Thanks for checking it out. Working on this drawing reenergized the inking side of my brain & it was a blast to work on. Until next time, God bless you!
Posted by Philip A. Buck at 7:00:00 AM No comments: