After having completed a few paintings while studying the gnomes (1, 2, 3,) I decided to focus a bit more on practicing painting natural environments. One of the things that excited me about painting the gnomes was that I'd be challenged to paint more of nature than I usually do. This painting began simply as a way to study and practice painting moss and leaves etc. in watercolor. I quickly found that moss can be a little tricky. (Luckily I can be tricky too and employed my watercolor pencils as well as my usual brushes.)

It didn't take long for me to start adding more and more little gnome children into the picture. The final result is a gnome game of hide and seek! 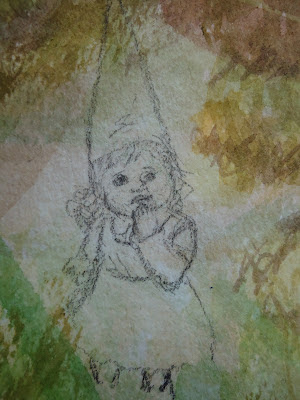 Here you can see the loose pencils I drew in the blank or blotted out spots of the painting. You can also see the slight differences that can occur between the penciling and painting stages. Sometimes, it can be a little discouraging when you try to paint something you have sketched out and it isn't the same, but many good things can actually come out of it. Its often good to let the process be a flexible one. 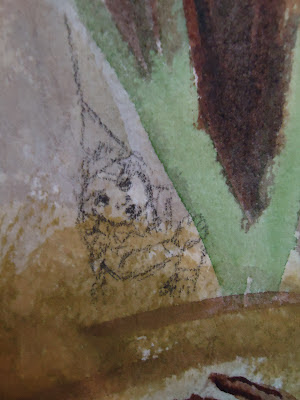 It looks like this little gal's found a good spot. But is it good enough? 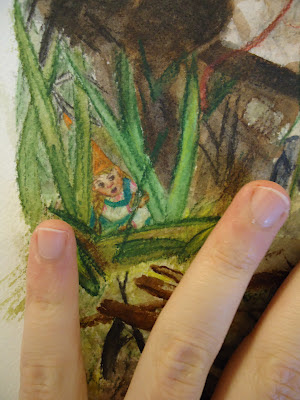 Here she is finished and shown with a few of my fingers for scale. She is a very little lass. And I have some very crooked fingers, huh? (I broke some when I was a kid playing games.) 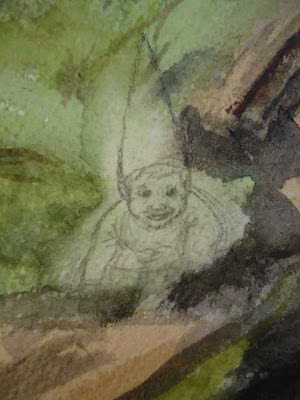 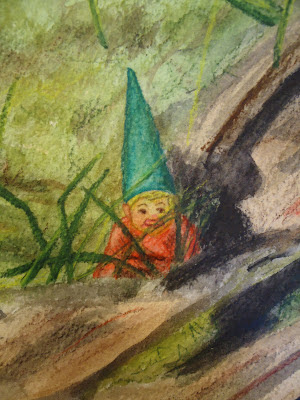 My watercolor pencils and small brushes came in handy while painting these tiny little guys. I'm often finding  new or forgotten ways to use everyday tools. Sometimes I just have to try things out to see what will work best. 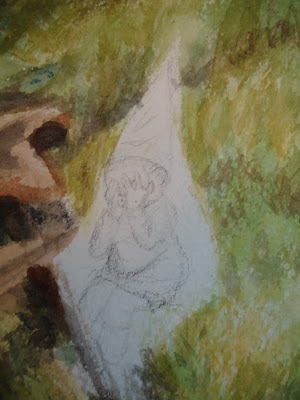 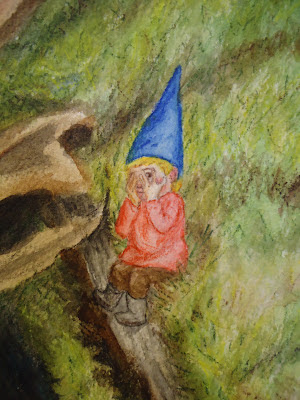 Uh oh, pals. It looks like this little guy is taking a peek!

It took a while, but here is the painting completed. The place they are playing is inspired by this photo by . I'm pretty happy with how the moss and leafy bits turned out, as well as with the little gnome friends. I'm not sure if this study will get to join the others in the upcoming exhibit because of its unusual format. But don't fret, gnome fans! There will be more! :) 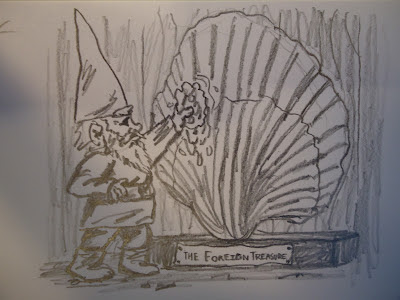 BONUS SKETCH!
While I was looking through my sketchbook the other day while planning another gnome painting, I found some sketches and thumbnails for potential gnome illustrations and paintings that I had forgotten all about. They dated back to February or March. After putting them in the back of my mind for a while as I worked on a few other projects, the gnomes came back big time! haha! Above is one of these slightly older sketches. I may still paint something like this. I mean, that fellow is pretty proud of his special, treasured shell. That is pretty cool.

I still have more gnome process posts I'm hoping to share with you guys before the show, but until then,
I'll see you later, gnomiacs! :) God bless!