The Racing of the Hares- Part One

Good Gravy! It's been quite a while since I began posting my watercolors of gnomes that I painted for the alumni exhibit at Carson-Newman University. I haven't posted about them and my process in a while so lets dive into one right now!

First, as is usually the case, I began with some loose thumbnail sketches and doodles. I was sketching out all kinds of different ideas for gnome paintings, but I kept coming back to scenes with gnomes riding wild hares. 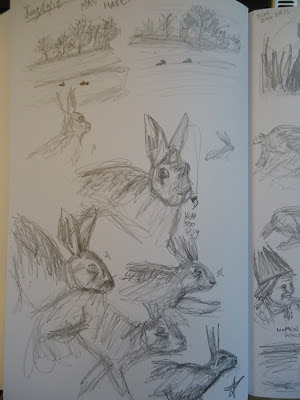 If I was going to doing a painting with a hare in it, I would need to become quite a bit more familiar with the awesome creatures. "Familiar" here meaning lots of sketches and studies of them running, sitting, eating and more! 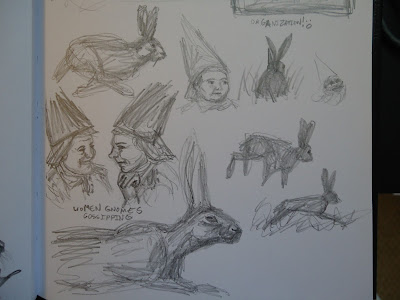 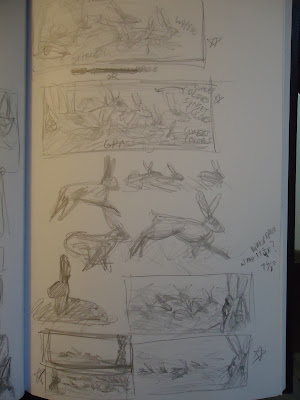 A large part of my studying the hares was occupied with watching and freeze framing videos of them in the wild such as the videos here, here, and frequently the video here. 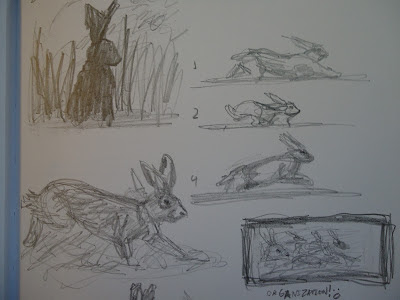 I narrowed my ideas down between two different images. Both would consist of at least some of the gnomes on hares going for a run. I wanted this to look very natural and real, so I got a bit more maticulous than usual as I studied the way the animals' bodies moved as they ran. Above, you can see where I was breaking down parts of their running. 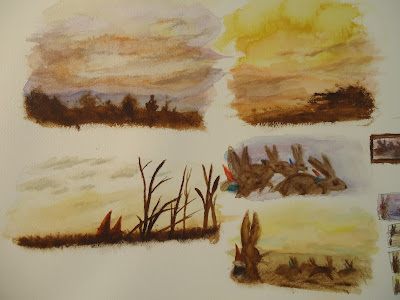 I also knew I wanted to the painting to, at least in some manner, take place at sunrise or sun set. I didn't know if it would be the focus or merely a suggestion in the painting. I did know that it would mean I needed to practice. I'd gotten a bit rusty at painting skies and landscapes. 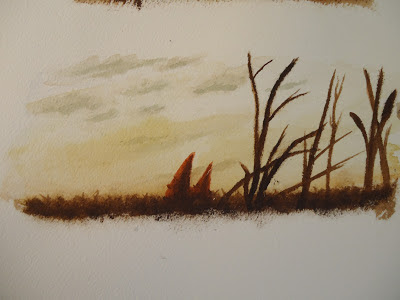 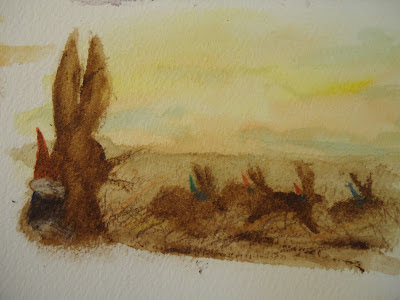 Above and below are a few detail photos of different watercolor sketches I did to further explore the two images I was considering. This stage largely consisted of experimenting with different color combinations and compositions. 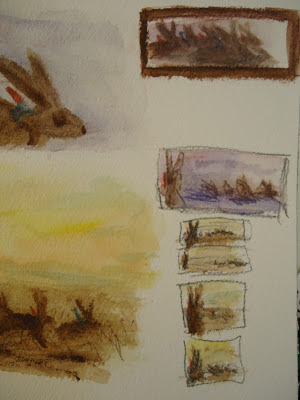 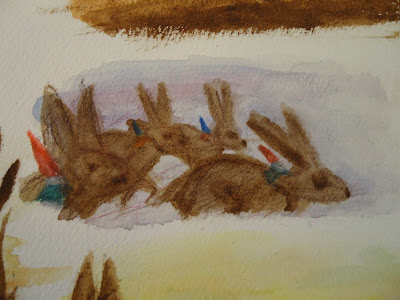 Here is where I tried a step that I don't often do with my watercolors. Once I decided which image I wanted to paint, I drew each hare's position loosely in Photoshop and then arranged them in exactly the composition I wanted. This helped me further solidify the image before I actually started on the watercolor paper. 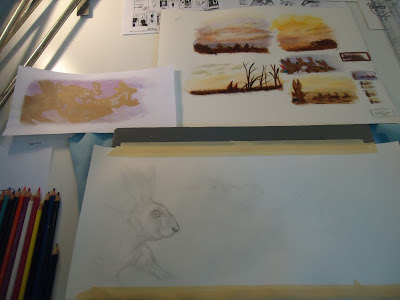 I then spread out select studies and sketches as reference and lightly roughed in each hare on the paper (which was already taped to a watercolor board and soaked a bit.) After that, I started to draw in the awesome guys. 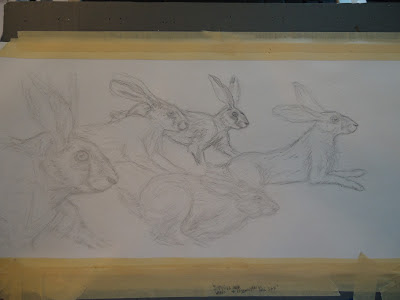 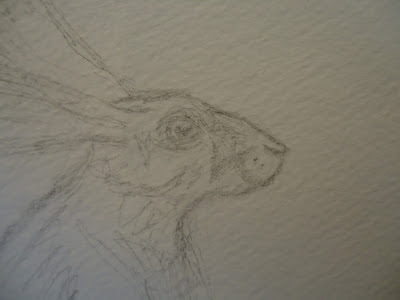 Regal, yet wild. I really dig hares now, by the way. Next, was a very important step: the gnomes! 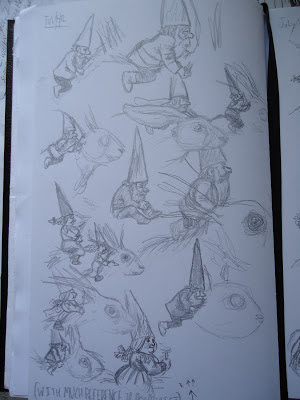 I began to study the gnomes and how they'd sit on a hare while riding and how high or far back on their necks or heads they would be. Of course, along with photos, I looked to Rien Poortvliet's gnome art for help with lots of this. You may be able to notice some of his work in my studies. 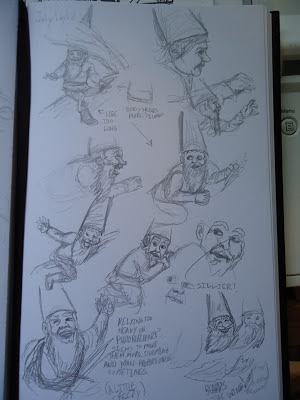 I think that is all we have time for today, but I hope to post the rest of this one soon wherein we will explore the exciting and terrifying part of the process: Painting! I love it, guys! Don't you? Well I hope you enjoy theses more "in depth behind the scenes" posts. Until the next one, God bless!

P.S. You can see the final image and other gnome paintings in other posts here on my blog and also on my new Behance profile.

(The Racing of the Hares- Part Two HERE) 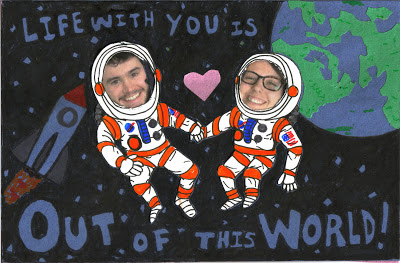 Here is the front of the card I made for my girlfriend this Valentine's day. She is truly incredible so I decided to cut out paper and such to make her a card that showed her how incredible she is. What is more awesome than space?! She wrapped her gift to me in wrapping paper that had photos of her goofiest faces on it! How cool is that?! Really cool? Yes, you are right.
I hope that you all have a HAPPY ST. VALENTINE'S DAY!!!!!!!! You deserve it because you are awesome too! God bless!

The Amplifier- S is for Shelter 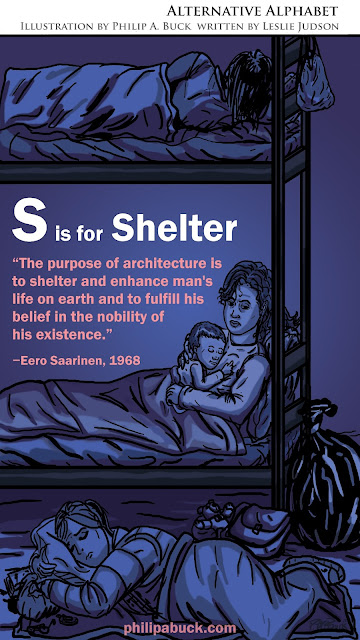 Hello again! The newest issue of The Amplifier is out in the Knoxville, TN area! Above is my illustration for the issue. Below are some of my loose thumbnail sketches & notes I completed while planning the image out with The Amp's Leslie Judson. 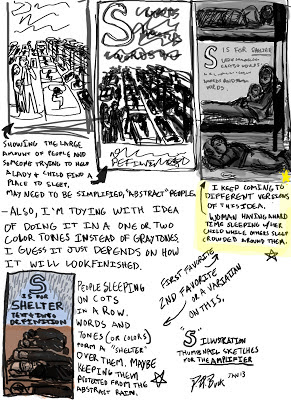 The newspaper was featured in a great news spot the other day. You can watch the video here to find out more about the paper, its staff, & its vendors: http://on.wbir.com/WPFDS2  Thanks to the folks of the Amp for letting me have the pleasure to take part in what you're doing. And thank you all for checking out my site & taking a look at my work! God bless!
Posted by Philip A. Buck at 11:00:00 AM No comments: