Have you heard about AW YEAH COMICS? Aw Yeah Comics is a comic shop in Skokie, IL that was Founded by Franco Aureliani, Art Baltazar, and Marc Hammond. Though I've never been to the store, I'm a big fan of their approach and of Art and Franco's amazing work on comics like Superman: Family Adventures, and Tiny Titans as well as their hilarious podcast.

Imagine how excited I was when I heard that they were starting a Kickstarter in order to fund their own creator owned comic series called AW YEAH COMICS! You may have heard me talking about it on Tumblr and Twitter. They reached above and beyond their goal! You can check out the amazing stuff that happened here. Their going to get to make over a year's worth of comics now! I was happy I could contribute in a small way to their great all ages comics getting made. So exciting, guys! Just to say, "Congratulations" to the whole AW YEAH crew, I put together this illustration of some of AW YEAH's heroes. It's also my take on a great Superman Family cover by Curt Swan and Neal Adams. Way to go everybody! Comics for all!!! :) 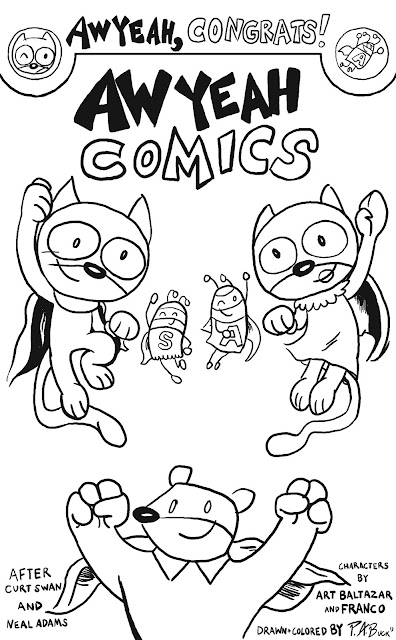 P.S. Here is the original digital ink version (mess ups and all haha) in case you want to print it off and color it! You know, if ya dig coloring stuff. (I do.) Thanks for checking in and make sure to check out the new, upcoming Aw Yeah Comics!!! :) God bless!
Posted by Philip A. Buck at 5:09:00 PM