I recently had the pleasure of being commissioned to do a graphite portrait of an engaged couple. The portrait was intended to be given as a wedding gift from their friend. Isn't that a cool wedding gift? Anyway, It had been a little while since I'd done a finished portrait in pencils rather than just a figure study or sketch, so I knew I wanted to approach this one with a process that would be a bit more forgiving of my rustiness. This is what I did: 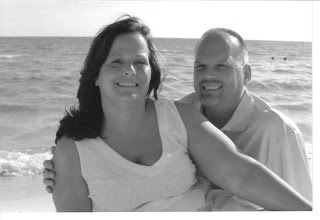 First, I scanned the color reference photo I had been given as a "gray scale" file onto my computer. 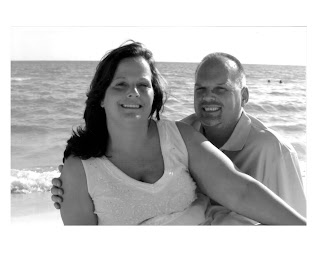 Second, I used Photoshop to adjust the Brightness, Contrast, and Levels until the tones and forms in the scan were a little bit easier to see than in the original photo and the initial washed out scan. 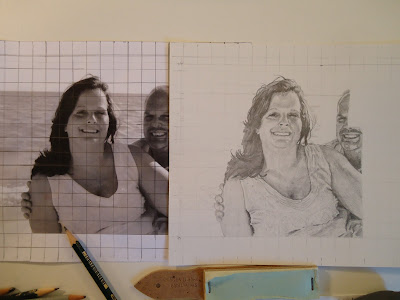 Then I printed the adjust scan off at approximately the size I was asked to make the drawing. I then measured away! Since I was a bit rusty and didn't want to take any chance with this drawing, I used the tried and true "Grid Method." I measured and drew a grid on the print out and then did the same on a piece of cut Bristol board paper. Things had to be as precise as they could so that the following steps would save me trouble rather than cause more. 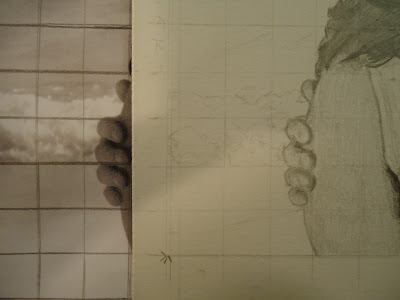 Each "block" of the grid on the print out had a corresponding block on my drawing's piece of paper. I carefully began to draw the portrait block by block, row by row. 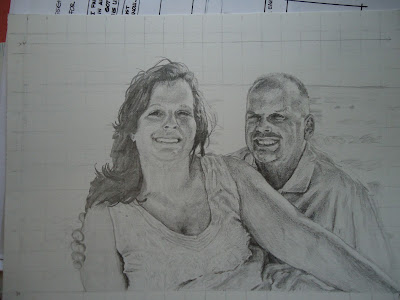 I only drew in the shapes or "masses" of the different tones of the image in order to lay down a foundation for the forms and shadows etc. At this point is was sometimes easier to think of the subjects as areas of dark and light on an object rather than as people. Then, I could go back and make sure their personalities and likeness hadn't been lost. 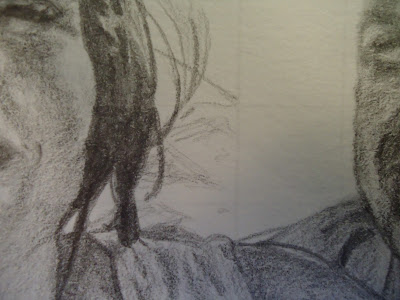 I also used my eraser to lighten the grid so that it wouldn't show up as easily in the final image. The last thing folks want is a picture of themselves with lines through their face -or so I suspect. 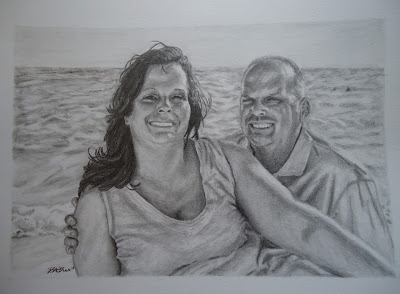 Finally, I went through a series of drawing stages in which I darkened, lightened, sharpened, and softened the areas that needed it in order to make the drawing look a bit more like the image in the original photo. I used my kneaded eraser for much of the softening and lightening. There were also various times through out the process that I still had to adjust the placement or depiction of a nose or a fold of cloth in order for things to look right and the likenesses to remain as accurate as possible. I then erased any remaining grid lines and sprayed the drawing with workable fixative so that it wouldn't smudge as easily. Above, you can see a photo of the final piece. The kind lady who commissioned it had it framed before she gave it to her friends. I hear it went over well. :) I'm glad I could help out!

Thanks for checking in! I hope you like these occasional looks at my process. God bless you all and have a great week!
Posted by Philip A. Buck at 6:31:00 PM