Hello! I just recently finished coloring this Adventure Time comic I made a little while back. It's not an "official comic" to be published or anything. I just needed to do more sample pages for my portfolio and was also itching to draw some Adventure Time characters! I love that show. Pendleton Ward and his crew are making a very creative and funny series. I may or may not have gotten the first season on dvd (Pssst, I did! My rad girlfriend gave it to me for Christmas!) And now kaboom! is publishing Adventure Time comic books by very talented folks such as Ryan North! Exciting times, guys. I was inspired. 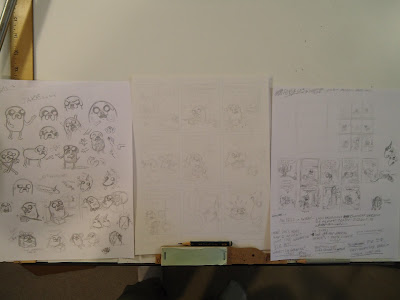 I thought I would show you all a quick look at how I did this comic. In the fuzzy picture above is my desk. On it you may be able to see that on the far right I have broken the lil story down into thumbnails and dialogue a few times. The page on the far left is one of my pages of character sketches and studies. I also worked out expressions and poses. In the center (sorry it is hard to see,) is the actual page that I drew the comic on. I printed out a sheet with nine panels printed in a light blue that I made using cartoonist extraordinaire, Dustin Harbin's panel grid template. This helped as a guideline while drawing out the comic. When the comic is completed, the scanner doesn't pick up the bluelines, so everything is cool.
Let's take a closer look! 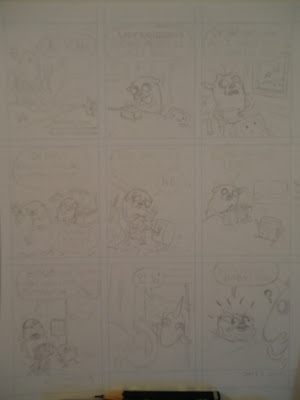 Here you can see the pencils lightly drawn in the blue guide panels. Well, you can kind of see them if you look really hard. They aren't drawn in very dark which makes them a bit tricky to photograph. 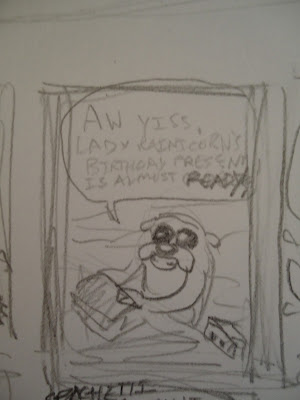 Here is a close-up of one of the teeny-tiny panels I thumbnailed of Jake and BMO. At this point, getting the story, idea, personalities, and composition was much more important than drawing them well or "on model." 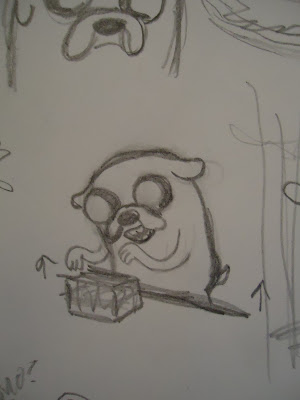 Above, you can see one of the little drawings I did on the "character study" sheet. I was trying to get a better idea of what Jake would look like in the panel, what his expression would be, and make it actually look like him. Some people do the whole page together like this and call the drawings "roughs." I do that to sometimes, but on this occasion I just drew them out whereever and whenever I thought of them in the process. 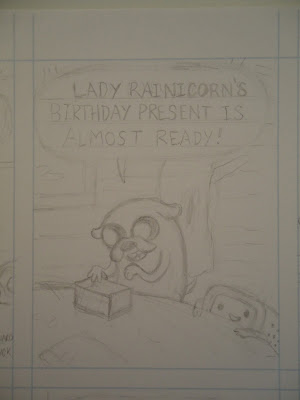 Here, you can see where the last step pays off as I drew the characters and their environment lightly on the actually page. This was done after loosley sketching in their shapes and the dialogue and word balloons in order to get everything spaced out correctly in the compostion. 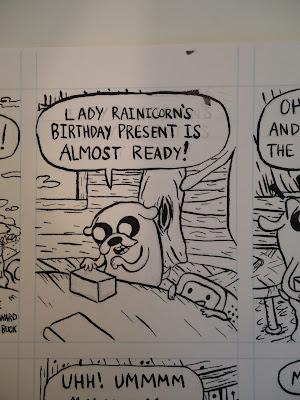 And here we have that panel inked (smudges and all!) I used my new Hunt's 102 nib to ink the comic on Bristol board paper. All that was left to do was to ink the panel boarders, erase the pencils, scan, and clean things up in Photoshop. Then what we have is: 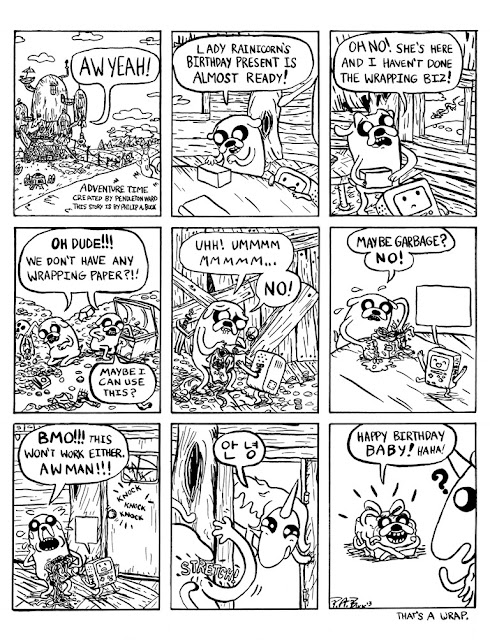 After all of that, I began the coloring process in Photoshop. I think it took me even longer to do that than all of the above steps (coloring can be a lot of tricky work!) I hope you all like it and enjoyed a quick run through the process. It was a blast to make. When you read it, it helps to think of John Dimaggio's distinct chuckle when you get to the "haha" in the last panel. :)

This comic is now on my new Behance Portfolio along with more of my comics, if you would like to take a look. Thanks again for taking a look at the stuff here on my website! Have a great rest of the day, pals! God bless!

(Characters were created and are owned by Pen Ward.)
Posted by Philip A. Buck at 7:30:00 AM