Merry Christmas and Happy Holidays to you all!
May God bless you and yours!

1 "At that time the Roman emperor, Augustus, decreed that a census should be taken throughout the Roman Empire. 2 (This was the first census taken when Quirinius was governor of Syria.) 3 All returned to their own ancestral towns to register for this census. 4 And because Joseph was a descendant of King David, he had to go to Bethlehem in Judea, David’s ancient home. He traveled there from the village of Nazareth in Galilee. 5 He took with him Mary, his fiancee, who was now obviously pregnant.
6 And while they were there, the time came for her baby to be born. 7 She gave birth to her first child, a son. She wrapped him snugly in strips of cloth and laid him in a manger, because there was no lodging available for them.
8 That night there were shepherds staying in the fields nearby, guarding their flocks of sheep. 9 Suddenly, an angel of the Lord appeared among them, and the radiance of the Lord’s glory surrounded them. They were terrified, 10 but the angel reassured them. “Don’t be afraid!” he said. “I bring you good news that will bring great joy to all people. 11 The Savior—yes, the Messiah, the Lord—has been born today in Bethlehem, the city of David! 12 And you will recognize him by this sign: You will find a baby wrapped snugly in strips of cloth, lying in a manger.”
13 Suddenly, the angel was joined by a vast host of others—the armies of heaven—praising God and saying,

14  'Glory to God in highest heaven, and peace on earth to those with whom God is pleased.'

15 When the angels had returned to heaven, the shepherds said to each other, “Let’s go to Bethlehem! Let’s see this thing that has happened, which the Lord has told us about.”
16 They hurried to the village and found Mary and Joseph. And there was the baby, lying in the manger. 17 After seeing him, the shepherds told everyone what had happened and what the angel had said to them about this child. 18 All who heard the shepherds’ story were astonished, 19 but Mary kept all these things in her heart and thought about them often. 20 The shepherds went back to their flocks, glorifying and praising God for all they had heard and seen. It was just as the angel had told them."

p.s. About the GIF animation: It was completed by drawing 19 frames of illustration in Photoshop. The elk's major movement and look were rotoscoped on video frames from footage of an actual elk found in this awesome video. The smile, ornaments, and greeting were, of course, added during the animation process.
Posted by Philip A. Buck at 10:02:00 PM No comments:

A Family Portrait in Graphite

Hey guys! Recently, I had the privilege of doing another graphite portrait commission. Here is a snapshot of the finished drawing. This time, it was of three people on an 8 x 10 inches piece of Bristol board paper. I mostly used HB through 4B pencils, but I may have used a 6B or Ebony pencil for the darkest spots. For more on the process I used for these portraits click here to see previous posts about them. Thanks for taking a look! God bless and have a great week! 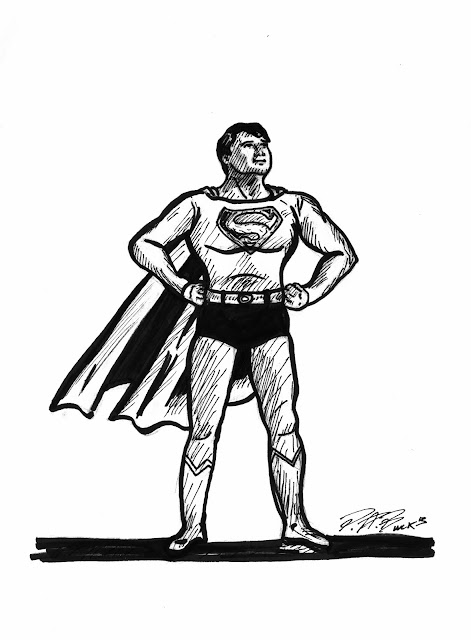 Can you believe that Superman turned 75 this year?! I couldn't stand the thought of  the year ending without posting something on here to celebrate, so here is a sketch of ol' Supes I did the other day. For more Superman fun, check out the Superman tag on my Tumblr blog. It would be great if I had time to post a sketch of Lois Lane (she turned 75 too!) or The Doctor (50!) but we'll just have to wait and see about that.
God bless, you guys!
Posted by Philip A. Buck at 7:00:00 AM No comments:

It's Cyber Monday and that means FREE SHIPPING* all day at my Society6 store!

And now you can buy all these All New products: Mugs, Kids T-Shirts, and Onesies! This is the perfect opportunity to get some holiday gifts for someone special or for yourself, but this great deal is only available today!

I'm super excited about this deal and the new products available. So cool! All you have to do is go to my SHOP page and click Society6 or just click this link to go straight to my Society6 store. I hope this helps you guys out. Thanks for stopping by! God bless!

EDIT: This sale is now over.

From now until Sunday, December 8, 2013 at Midnight Pacific Time,  you get FREE Shipping* and $5 OFF each of my products when you order from my Society6 Store. But this promo is NOT automatically available on my store. You've got to use this handy LINK. Act now my friends!

*Free Shipping does not apply to Framed Prints, Stretched Canvases or Throw Pillows with inserts.
Posted by Philip A. Buck at 12:43:00 PM No comments: