Jesus, da Vinci, And Me: The Last Supper In Watercolor

Hi there! As you may remember, I've been working on a large (at least compared to much of my other recent work,) watercolor commission. No? You don't remember? That's cool. I was hired to paint a watercolor of Leonardo da Vinci's The Last Supper. And now it's finally finished!

The piece would need to resemble the Renaissance master's mural, but could have my own, slight changes- the client was very flexible about all of this. Like most people, I've been a fan of Leonardo da Vinci's for quite some time. I knew this would be quite a challenge (how do you translate a da Vinci into watercolor?! He was so good!) but I was also very excited to dive into the project. It was enjoyable to research and remind myself of the amazing man and his incredible art. I believe I've spoken before about how many elements of his work have openly appeared in my own work over the years.

I was also excited and a bit anxious about the subject matter. The Last Supper. Jesus Christ and his apostles taking the first Communion (also know as The Lord's Supper or The Eucharist,) before he would be betrayed and later crucified. And the Apostles hearing that one of them would be the one to betray their Lord. The divinity and importance of the scene wasn't lost on me! I was eager to share, in my own way, this great story. But respectfully and skillfully copying a master's famous interpretation of the special meal was fairly intimidating.

For a good look at the original painting by da Vinci and some great insights about it, check out this video by Smart History from Khan Academy.  It was videos like this and books like Leonardo da Vinci by Lucia Aquino (shown above. to the left,) that continued to inspire me while giving me much needed information about da Vinci and his famous painting. But where to start? I first completed some studies to help me get a clearer feel and direction on how to "imitate" da Vinci in pencil and watercolor. I then took notes of my research on the master and his painting.

I then prepared the watercolor paper by soaking it and stapling it to a "watercolor board." After that I started planning out the painting in pencil. I measured and marked places on the paper where the architecture and figures would go in relation to the original painting. This stage took quite a while (he sure did love his math!) I couldn't get any good pictures of this stage because the pencils were so light. I then lightly roughed in the figures and furniture.

I came back and tightened up the details on the figures. I knew it would probably look much different by the time it was painted, but I wanted to give the picture a good and accurate foundation. I also originally planned to just do mostly washes of color over the line-work. However, as I painted the figures I went for a more fully rendered look instead. Here are just a couple of photos of the pencils I did of the small figures:


Here you can barely see the light pencil lines I used to guide the elements of architecture radiating outward from Christ's right temple. The horizon line for the painting is generally aligned with his eyes.


I then painted the figures. I did this in layers, adding more varying tones and details as I went. I also employed watercolor pencils constantly to redefine elements like their eyes, shadows, the wrinkles in their cloaks, and their hair.


After the figures were painted in, I started working on the background. Since my client wanted to display the finished piece in her rustic cabin, we chose an "earth tone" pallet of colors as opposed to a direct translation of da Vinci's color choices. 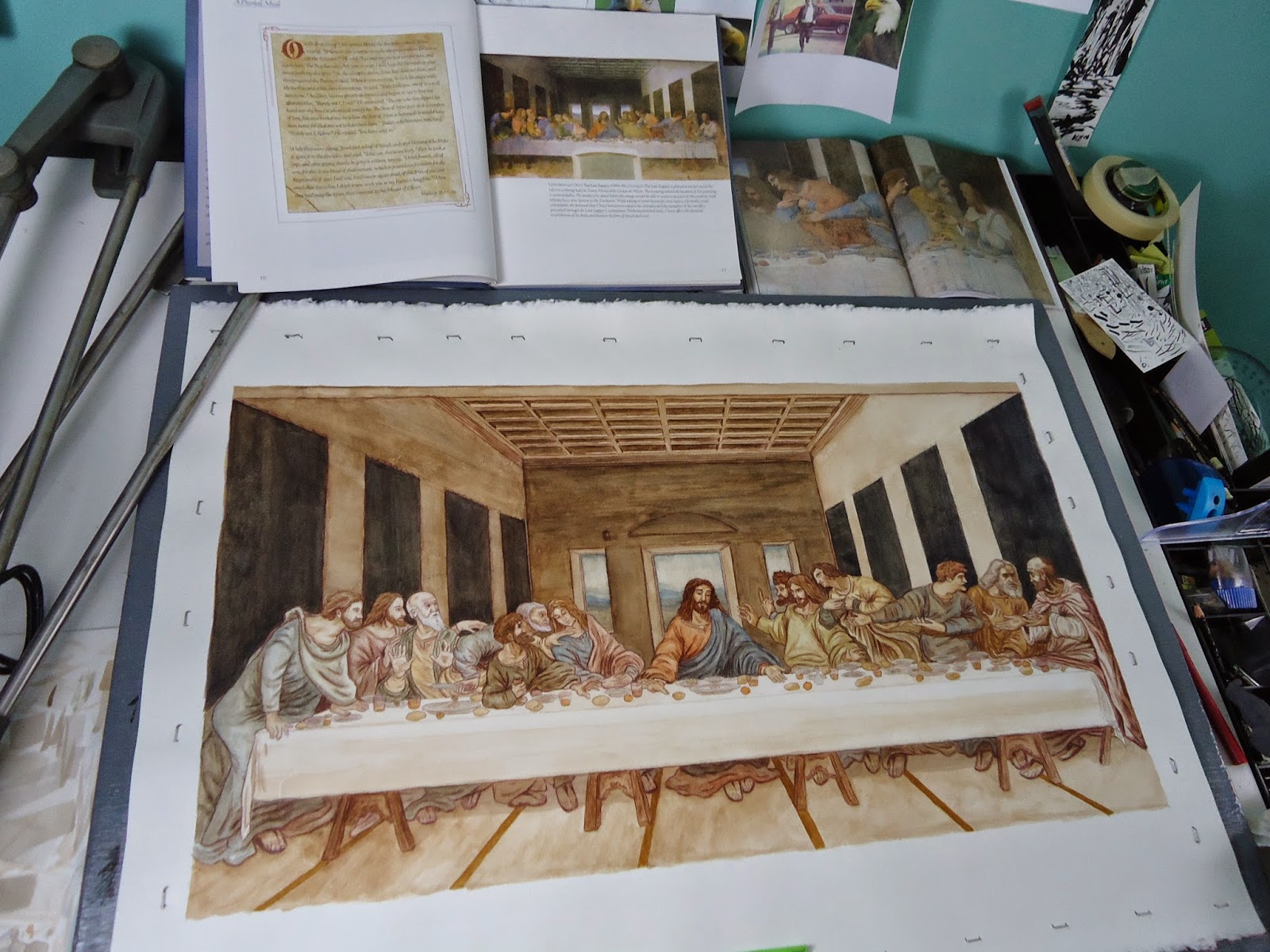 You can see here that I continued by painting the table, the food, and the landscape that can be seen behind Jesus. After that, I just had to do touch ups and take it off of the board. Finished!

I deliberately changed some of the figures' features and wardrobes so that they would be a little more historically accurate (at least in my limited research,) than the Renaissance-stylized, European men and clothes that are in the original. At the same time, I tried not to change them too much; I was commissioned to paint after da Vinci's Last Supper, after all.

Finally, here is the finished piece. After going through the whole process and studying da Vinci's painting so closely, my already great appreciation for the work and artist increased immeasurably. I also had deeper consideration of the Apostles and Jesus as men. Men who did miraculous things, but also men who came and ate together. And also about the heavy, bitter sweet burden that must have been for Jesus, knowing it would be there last meal altogether, but also knowing of the good yet to come after his resurrection. There's a lot to think about in this scene, and in the way Leonardo da Vinci wonderfully portrayed it.

Thanks for taking the time to stop by and read this! I hope you enjoyed another look at my process. Now it's on to more paintings for me. Until next update, you can find me tweeting, plussing, tumbling, and behancing elsewhere on the web. God bless, you guys!