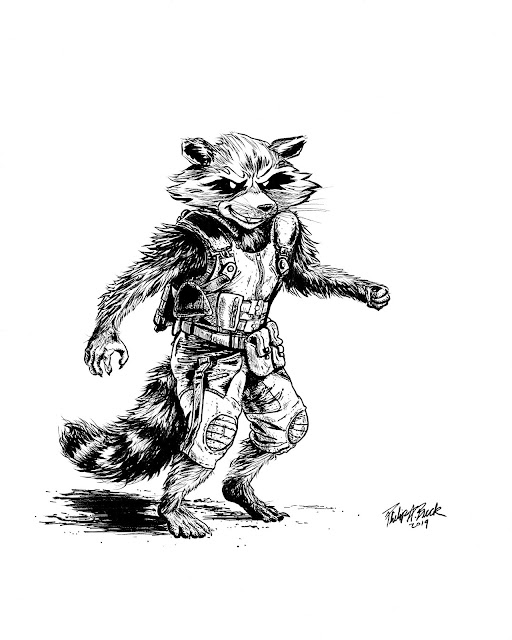 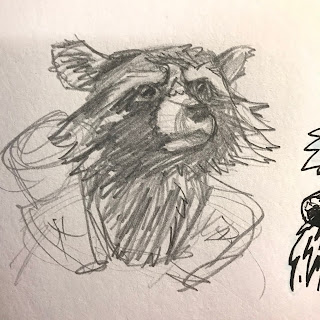 While trying to decide if I wanted to do a "finished work" featuring the scrappy space hero, I looked up some reference photos from the Guardians of the Galaxy movies. The rough sketch above is my attempt to get a feel for Rocket's shapes, overall form, essential details & his personality. This image is from a more solemn moment, but I decided I wanted something a bit more fun. 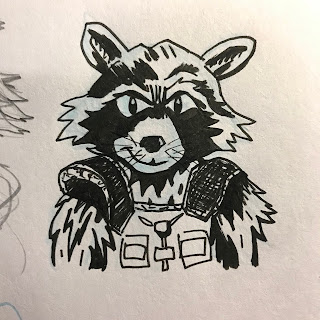 Here, we have another little exploration drawing. Though he's popular from the current movies, Rocket has appeared in comics & animation plenty of times before & I wanted to explore a more "cartoon" or "comic booky" style of the character. But I didn't just want to copy all of the great artists who have drawn the character. So, while looking at the film stills, I also referred to characters from cartoony franchises (specifically the Sonic the Hedgehog video games & animated sequences.) I put all of that into my head like a blender & this is what came out. 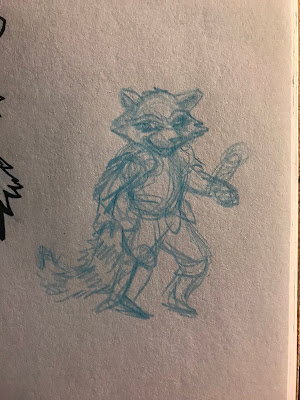 After that, I decided I did want to do a finished illustration of Rocket in a "hero pose," & broke out the blue pencil to sketch a teeny, little thumbnail sketch. I was totally thinking of current comic interpretations of the character while looking at Sonic characters when drawing this one. I wanted that energetic feeling they give off. 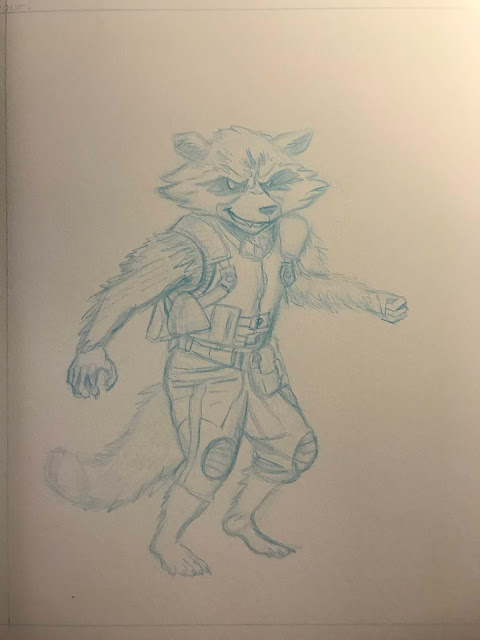 I marked off a space of 8x10 inches on a piece of Bristol board paper, roughly sketched out the major shapes & lines of movement & then started adding details. At this stage, I tried the keep that cartoony quality in mind, while blending it with what I was seeing in reference from the films. I think this led to a more "realistic" pose & proportions, while still capturing the vibe I was looking for fairly well. 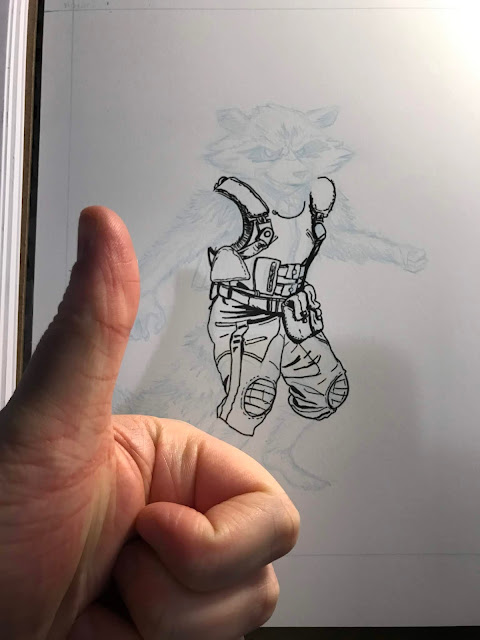 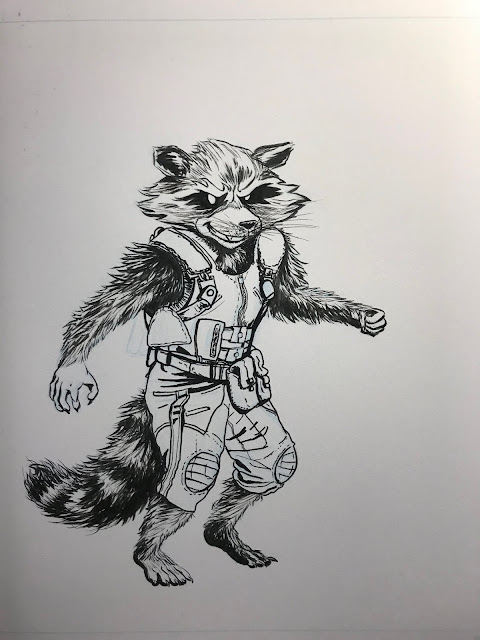 I let myself get real "brushy" with the areas of fur, while still attempting to control the lines & portray volume & mass. I used the PITT pens for the majority of the outfit & other details. 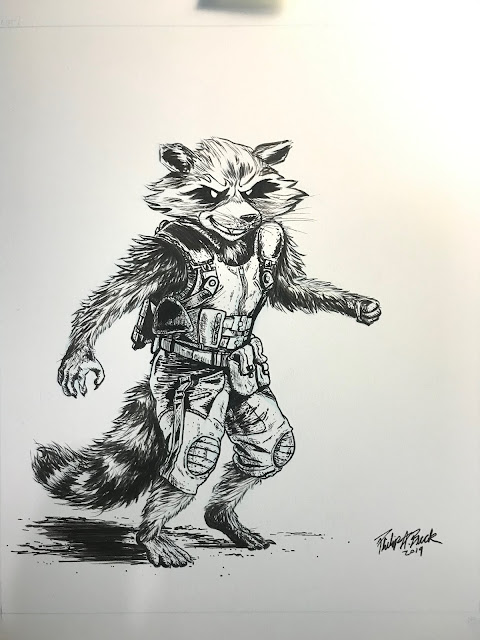 After a couple of marks with a white ink pen for corrections, I was done. There you go! A finished Rocket Raccoon! This is a photo of the finished piece. The version at the top of this post was then scanned, touched up & had its levels adjusted a little bit in Photoshop. 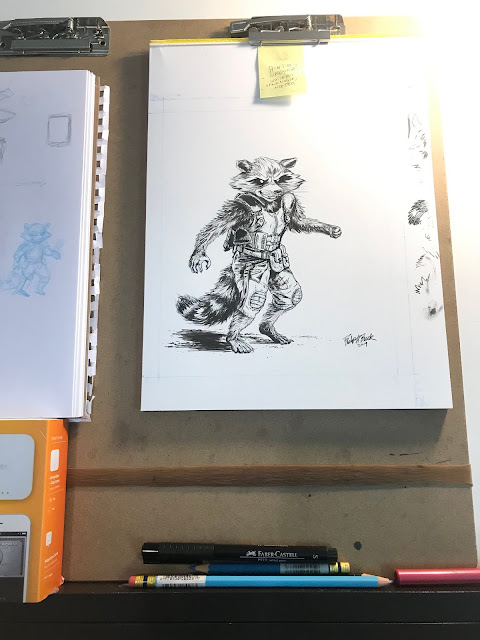 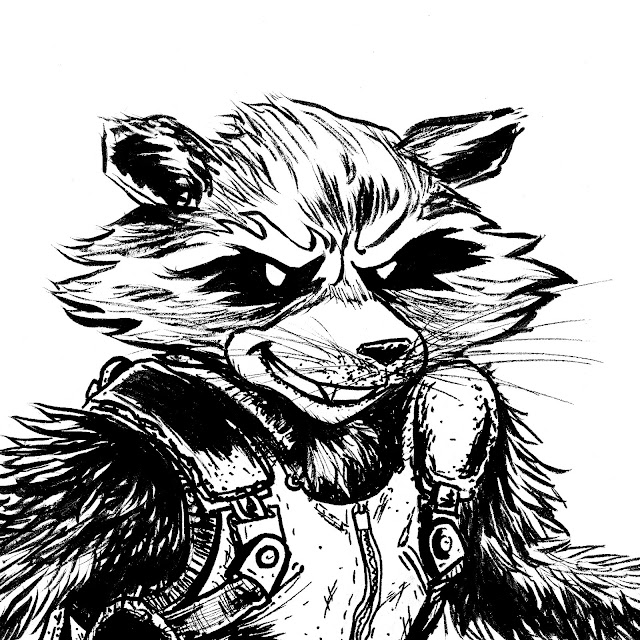 I hope you all get to see the new Avengers movie! It is truly something unique. My head is still spinning a week later! I'm still thinking over whether I will take some time to color this one or not. I'll probably end up putting it in the shop for sale, if you are interested in owning original Rocket art. Until next time, God bless, you guys!